You have to give them credit, at least they're trying. That is how I felt at this park. I walked into this rotunda (which is designed the same dimensions as the one at Ebbets Field) and I felt like I was walking into an aquarium. The concourse on the first level was like a carnival, and I mean this in a good way. There were games, DJs, entertainers, trivia shows, all sorts of things to entertain a single person or a whole family. I was quite impressed... until I got to the actual stadium. I had to remind myself that I was watching two big league teams and that I was not sitting in a minor league park. The promotions in between every inning seemed amateurish for a MLB park. I felt at sometimes that I was inside a high school gym. Although it was comfortable, pleasant, and very colorful (literally). 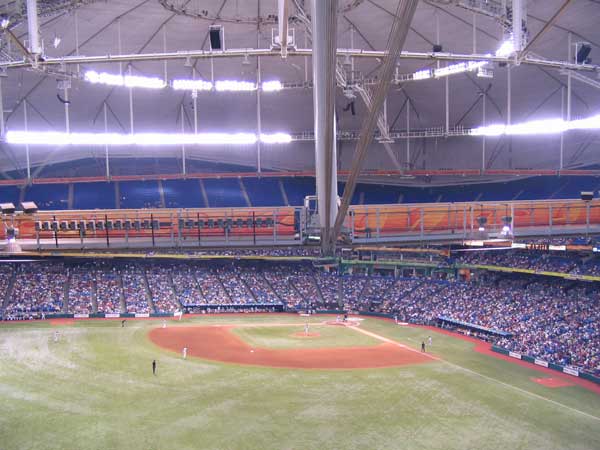 This park may have been doomed from day one. The Tampa Bay area already has an awful lot of minor league teams that play for the Florida State League including teams in Clearwater, Tampa, Dunedin, Lakeland, and Sarasota, all of which are about an hour or so from St. Pete. Also, with beautiful weather, why the hell did they dome this stadium? This stadium was built to lure a Major League team to Tampa Bay, even though MLB advised against it. In 1989 they thought they had the White Sox and in 1992 it was the Giants. It wasn't until 1998 when they were granted an expansion franchise, with the condition they be out of Tropicana Field by 2010. 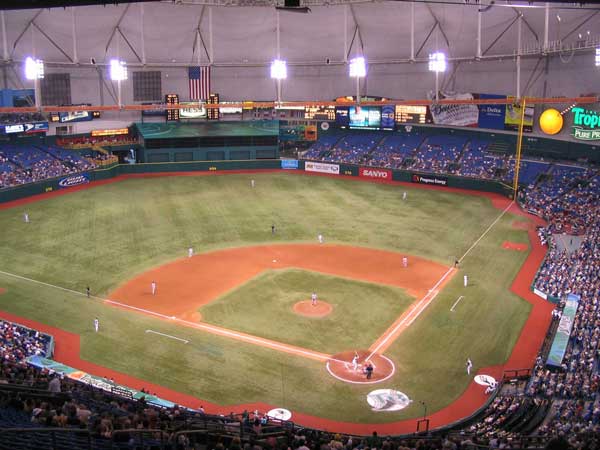 The roof of this dome is one of the largest cable supported domed roofs in the world. The roof itself is Teflon-coated fiberglass and is lit with an orange light at night. This makes Tropicana Field look like a large orange. There is a restaurant in the outfield. This stadium has hosted, in addition to baseball and hockey, football, soccer, tennis, weight lifting, ping pong, karate, gymnastics, figure skating, motor cycling, monster truck, race car, horse, people, and mud bog racing. 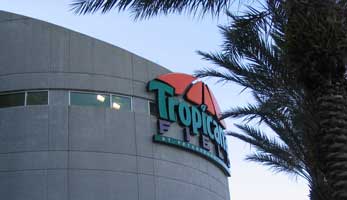 The Rays retired numbers are: