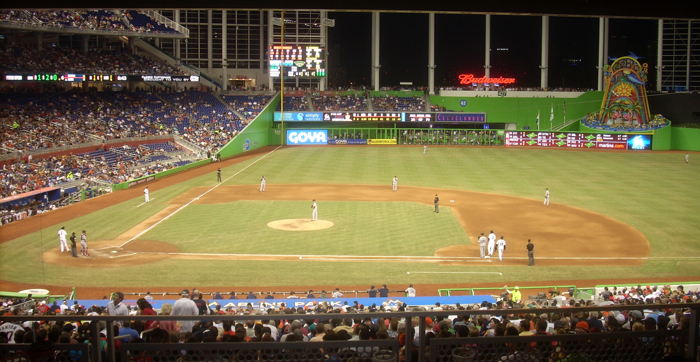 For those of you who read any of my reviews on ballparks, you know I love when I feel that the architecture fits the city or neighborhood. For instance, I love how Nationals Park glass and stone facade fits so well into DC's existing style. On the other hand, even though I think Citizens Bank Park is a amazing park, I feel a retro style park in a sea of parking lots looks out of place. So, with that being said, I love how the Marlin's new digs matches up nicely with the modern feel of Miami. You know those television shows like Burn Notice and CSI: Miami that always have those sweeping overhead shots of the City? Marlins Park could fit in any of those images. I was also shocked at how small the ballpark was. For a new construction, the 36,000 is tiny. But on the other hand, a sold out park is more fun than a half empty one. Also, the fish tanks behind home plate were pretty nice. The negative, you ask? Well, the park is kind of far from downtown in Little Havana. I know the Marlins are trying to build up a local fan base, but it is not in an ideal part of town. Also, the home run mural with flamingos and all that was kind of absurd. 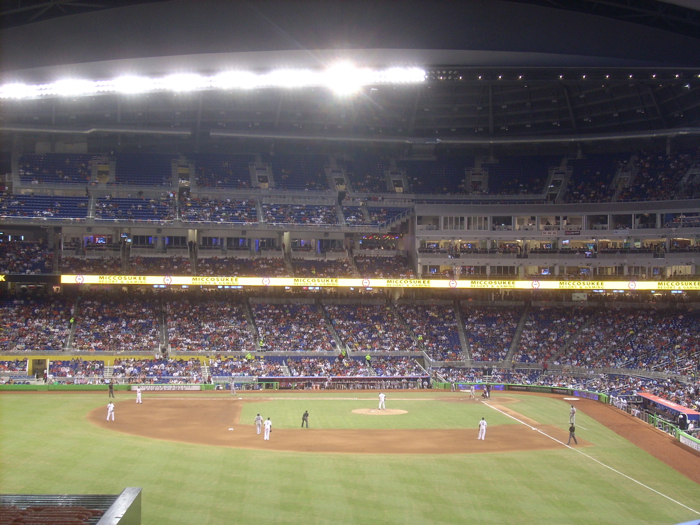 The path to constructing this stadium, located on the former site or the Orange Bowl, started in 1987. At the time, NFL's Miami Dolphins owner, Joe Robbie, believed that baseball coming to Florida was only a matter of time, so he designed his football stadium, Sun Life Stadium as being able to accommodate baseball fairly easily. When MLB expanded in 1993, one thing Miami had in their favor, was that there was a park, albeit not a great baseball park, for them to play in ready to go. Almost immediately, the Marlins began pushing for a baseball only stadium, so they could "make enough money to compete" (even though they won two World Series in the span of a decade). The Marlins believed they needed a retractable roof due to Miami's hot and humid summers combined with the spring's thunderstorms. To make a long story short, there was a big financing squabble between all parties involved, and in the end, Miami Dade County ponied up about half the money for the park, with the Marlins and City of Miami contributing roughly 25% each. The idea was to build a park that was "all about Miami". As a result, the design touches evoke Miami, from the colors, the modern design, and even the nightclub with swimming pool in left field, bringing in a touch of South Beach. The ballpark had a few hiccups, as to be expected, when it opened. The retractable roof, which is actually glass panels, so you can see Miami's skyline, and a membrane, so heat isn't trapped in, leaks. Evidently this is par for the course and will be corrected. The other problem is the outfield grass. It is dying as it is not getting enough sunlight. There is a lot of public art around the stadium, including the before mentioned "home run" mural, which some, like me, have said is absurd to others who feel it sums up Miami nicely. Perhaps both are true? 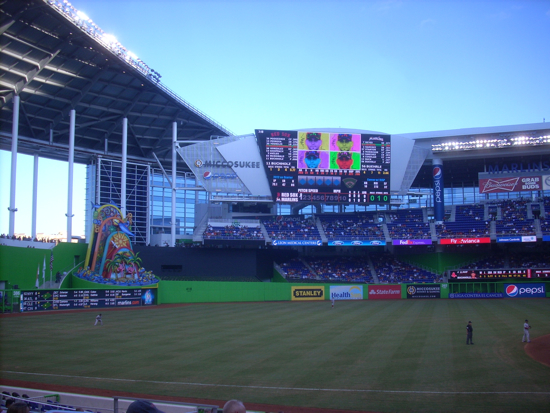