This park signaled the end or an era, the cookie cutter ballpark era. In the 1960s and 1970 there was a ballpark explosion. Numerous parks opened up and many of them were multi-use stadiums. Kauffman Stadium shows the world that you can in fact design a beautiful ballpark that doesn't just copy what the last guy did. Fortunately in 2006, the "Bi-County Tax" was passed in Kansas City. This tax will generate money to renovate this great park and keep it around for a while. This is a great place to see a game, and may arguably be the most beautiful park in the Majors. The only thing I did not get was how many people got into the video scoreboard generated hot dog race. 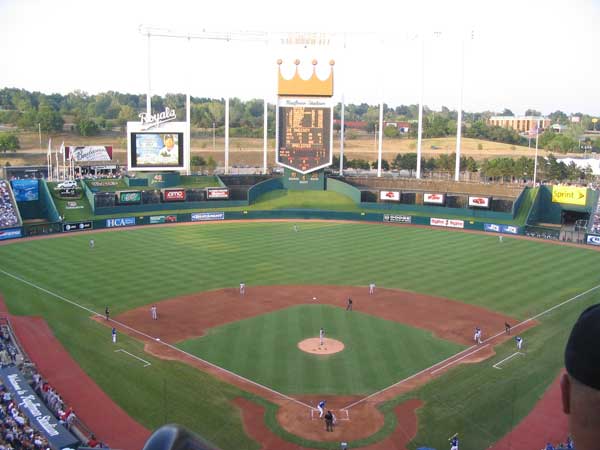 In 1968 Ewing Kauffman bought the expansion Kansas City Royals and moved them into (then) baseball's smallest market. It has grown into one of the more successful franchises in baseball. As a tribute to Kauffman, in 1993 the stadium was renamed, from Royals Stadium, to Kauffman Stadium. Kauffman (the man) died shortly after the name was changed. This park sits in the Truman Sports Complex which also contains Arrowhead Stadium, home of the NFL's Kansas City Chiefs. The 322 wide foot fountain in the outfield is the largest privately funded water works in the world. In left field stands a 30 by 40 foot JumboTron. When this was installed in 1990, it was the largest video display in the United States. The other scoreboard in center is twelve stories tall. This park has the best visibility for hitters in the Majors.

The Royals retired numbers are: 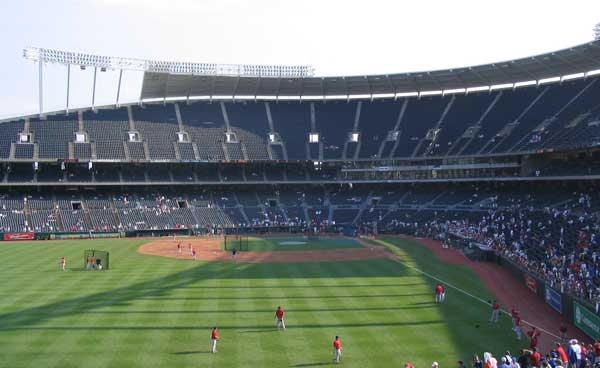