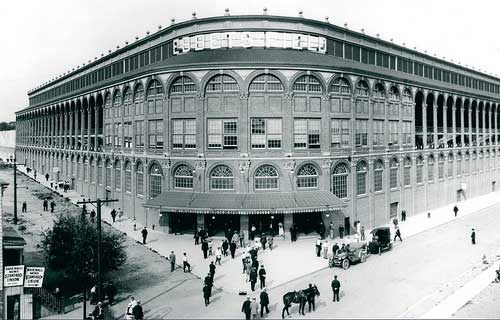 I am not old enough to have attended a Brooklyn Dodgers game here, but based on what I have read, this stadium should still be standing. Many amazing things have happened on the old site of the Pigtown garbage dump. The Ebbets Rotunda, at the main entrance, was an 80 foot enclosed circle of Italian marble. The floor was tiled with what resembled baseball stitching. There was a chandelier with 12 baseball bat arms holding 12 baseball shaped globes of light. There were 12 turnstiles and 12 ticket windows. The domed ceiling was 27 feet high at the center.

On opening day, April 9, 1913, a press box, an American flag, and the key to the bleachers had been forgotten. A press box would be added in 1929. On September 7, 1924 more than 500 fans got in by battering down the left field exit gate with a telephone pole. The score board was built in the 1930s. It has 289 different angles. It jutted out five feet at a 45 degree angle. In the 1940s Lonnie Frey of the Reds hit a ball that fell between the scoreboard and foul pole. The ball never came down resulting in an inside the park home run. Boards were put up the next day to prevent similar occurrences, however, Pee Wee Reese hit a ball similar to that to win the 1950 National League pennant. Abe Stark had a 3' by 30' foot sign that said "Hit sign win suit" at his store at 1514 Pitkin Ave. After World War II a Schaefer beer sign was added to the board. The "h" would light up to show a hit and the second "e" would light up to show an error. These were the official scorer's decisions. On May 30, 1946, a hit by Bama Rowell broke the clock above the scoreboard with a hit. That hit inspired the movie The Natural. The clock is now on the scoreboard of McCormick Field in Asheville, NC. 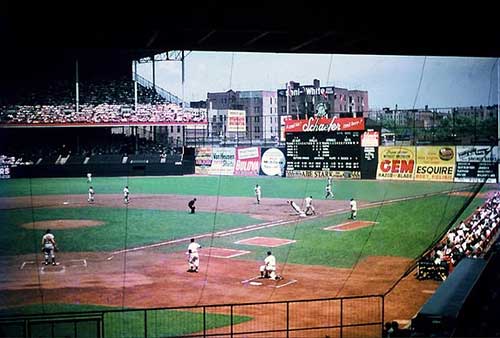 "Howling" Hilda Chester with her cowbell was the most colorful fan in the bleachers. Her bell is now in the Hall of Fame. There was also the Dodger Sym-Phony band that serenaded everyone with their own brand of music. In the winter of 1932-33 the double deck was extended from third base to left field corner and across center field. In the winter of 1937-38 box seats were added in center field. Joe Adcock hit the only ball totally out of the stadium. On February 23, 1960, a wrecking ball, painted like a baseball, crashed into and destroyed one of baseball's lost shrines. Now Ebbets Field Apartments are on the site. A wall still stands with a plaque (pictured below).

© 2001-17 Paul Healey. Photographs of the old stadium and plaque © their owners. Used without permission.