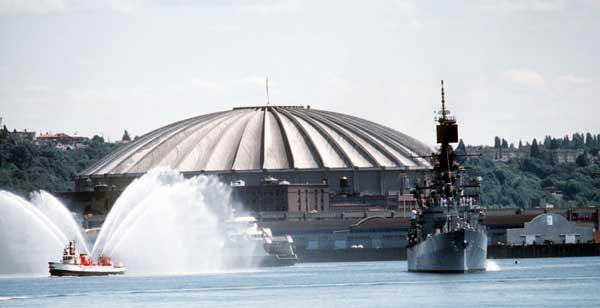 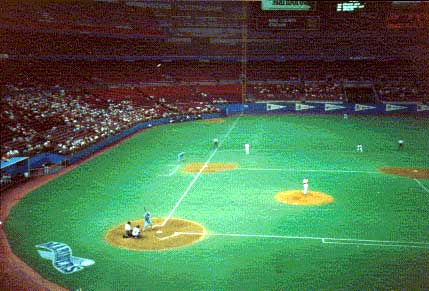 The multi-purpose 660' diameter, 250' tall, Kingdome, opened with a soccer match on April 9, 1976. Although the seating was designed for football, and was home of the Seahawks, the stadium also hosted professional baseball (obviously), and professional basketball with the Super Sonics. In fact, this stadium is the only stadium to host the MLB All Star Game, in 1979, the NLF Pro Bowl in 1977, and the NBA's All Star Game in 1987.

This park has not played host to a whole lot of exciting baseball history. In fact, the team's first sellout came in 1990, when Ken Griffey and Ken Griffey, Jr. took the field together, to become the first father - son tandem to play together in baseball history. Four ceiling tiles fell in 1994, forcing the Mariners to play their remaining home games in the strike-shortened season on the road. The speakers played somewhat of a role during games. Some balls that should have been homers were caught, other balls that were supposed to be caught were not, and some balls went up and never came down. A large amount of air condition units, 42 to be exact, kept a ton of balls from flying out of here. The 23 foot high wall in right was called the Walla Walla.